She wondered why someone would bother to write that; but then, “Why bother” was never a question you could ask about more or less anything on the Internet, otherwise the whole bunch of them shriveled to a cotton-candy nothing. Why had she bothered? Why does anybody? She was for bothering, on the whole; in which case thank you, MrMozza7, for your contribution, and thank you, everybody else, on every other website.

Annie and Duncan are a childless 40-something couple who spent the last 15-plus years together in an uneventful fishing town. They’ve been together not out of all-consuming desire and passion and love but out of comfort and familiarity. Duncan, obsessed about a certain has-been rocker, is responsible for anchoring the relationship in a muck. His is the kind of obsession that gets less cute as responsibilities grow and as the reality of age gets more palpable. He watches art films, reads books, listens to Pitchfork-favored type of music, and sees himself as such, as a cultured bloke. He is also single-mindedly obsessed about a Jeff Buckley-esque rocker who made exactly one album in his career but which is supposedly great, as considered so by music snobs.

His better half is Annie, all but deprived of her better years, having stuck with an obsessive.  Tucker Crowe, the Jeff Buckley, is the obsessed over. His record label releases a Sketches for My Sweetheart the Drunk Disc 2-like recording called Juliet, Naked, a raw version of the great album, Juliet, which he has drooled over for years. Duncan, being a slobberer, writes a lengthy, praise-y review of the album on a fan site, causing an uproar within the site’s smallish populace. Incensed over this refreshed obsession, Annie writes a diss review of the album which is 80% objective and 20% spiteful. Her relationship, all 15 years of it, has revolved around a has-been’s music and she is not going to pander again to what she thinks is an inferior version of a classic. Tucker Crowe reads her review, e-mails her in appreciation, Duncan flips.

Nick Hornby onto annoying know-it-alls, music obsession, and music know-it-alls should be a guaranteed barrel of laughs, but this is unexpectedly kind of sad. The relationship is so hopelessly resigned to compromise: two people sticking together because of middle-ageness and for lack of will to do something else. Duncan is sad.  He’ll save his Tucker Crowe bootlegs before even thinking of rescuing Annie should their house catch fire. As usual, Nick Hornby writes so excellently about music. He has very sharp ear for Internet dialogue, about how opinions get manufactured and traded in fan sites and blogs. He’s probably one of those celebrities who Google themselves to death, so he knows net noob behavior, from the worshipping to the commenting to the ALL CAPSing of probably a meek’s sole means of being heard. Juliet, Naked is a sly commentary on the Internet culture. I liked it a lot but the ending felt rushed.

I don’t think that Brits are the funniest people on earth. I’m sure they have their own special brand of humor that might be quite something  in some cultures but theirs  is not one I would consider truly universal, in the same way that Jim Carrey’s appeal and funniness is, at least on a generally accepted level. It’s probably too whimsical to even link the comic potentials of British comic writers and American hammy actor-comedians. Where Jim Carrey puts a face on his comedy, Nick Hornby puts famous bands in his, which is tougher.

Nick Hornby can be really funny but also gratingly wholesome sometimes. There is also never a shortage of cool people on his novels and this is perhaps what makes him such an easy breezy read and also a fluke. His characters are too cool that you never feel that much need to hold your breath and wait til the last few pages and see whether the Big Problem will get resolved because they will. But since most of the characters are cool, there’s not much need of resolving either and that’s mostly fine.

The single 30-year old cool dude in About a Boy, everyone in High Fidelity, heck, even the suicidals in A Long Way Down. In one of his more recent books, Slam, the population is not much different. Here you see the teenage boy, Sam deal with teenage fatherhood which may seem big but it’s really not. Sam, whose cool posse includes a 30-something mom who names pop celebrities whose ages she uses to gauge whether she’s too old or too young to undertake something such as  grandmotherhood (‘I’m the same age as Jennifer Aniston but I’m about to become a grandmother!’, etc), a cool dad, a likable enough boyfriend of the young mom, and the feisty, hot girlfriend who Megan Fox can play in the movie version, is so cool he sounds almost exactly like Holden Caulfield, the cherry on top of the coolness whatever. NOT that Holden Caulfield is ever universally accepted as cool or even loose.

Reading Nick Hornby, you either wish you’re one of his boys or you’re chums with them because they’re these lovable sort of outcasts who have a very fine sense of what it feels like to be an adolescent boy, whether you can actually identify with all the Briticisms or not. They’re always just the right amount of snark and charm and their taste in music and girls is almost always topnotch. It becomes problematic though as they tend to become interchangeable, differing only with their respective quirks. Sam of Slam for example talks to a Tony Hawk poster. Okay…

I get the impression sometimes that Hornby tries to wring out all the humor that could be squeezed out of all the jokes that his super hip characters throw at each other but in here, he lays off the funny antics at pivotal matter-of-the-heart moments and exchanges comedy for heartwarming, tender and, dare I say it, realistic conversations without coming off too touchy-feely. Nick Hornby’s people are, after all, usually a wisecracking bunch. But Hornby, for all his indubitable snarkiness, for all the rapid fire succession of witty banters that can get on your nerves sometimes, eventually lets the heartfelt moments play out for what they are and that’s when he succeeds the most as a novelist with a very huge and often obtrusive funny bone but with a much bigger heart. 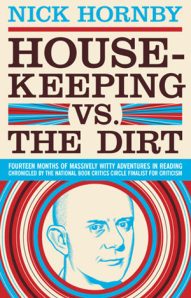 If… most people buy books because they like to be seen reading rather than because they actually enjoy it, then I would suggest that you can’t beat a collection of letters by an author – and if that author is a poet, thenso much the better.

This adequately explains my feelings about reading a book about books. I think I took this passage out of context but the thought goes well with my current condition of wanting to read non-stop. I do jobs on the side but mostly I prefer to read. In Housekeeping Vs. the Dirt, Nick Hornby suggests reading a book comprised of letters by a famed writer/poet because it will imply that you do know or you are at least familiar with said writer’s works and that this exercise in pure braggery will surely ‘impress the hell out of anyone’ who will see you reading the stuff. I don’t know what to make of this suggestion except that it’s a slightly weird thing to say, coming from the writer of such a funny and impressive book, High Fidelity. But maybe all he’s trying to say is that any book of that type is good and that it’ll do anyone well to be reading Letters To/From Author type of books. As for his book, it’s doubtful if one is going to achieve impressive status by reading it, his collection of book criticisms because for one, it has a goofy, non-serious looking cover. And speaking of goofy, sometimes I feel like my desire to read isn’t pure. I suspect that some of my reasons for wanting to spend hours with a book is so that I could write about them? Which is goofier and so very purposeless. At least Nick Hornby gets paid to read and criticize. I normally find this sort of I Love Books sentiment corny but there are people who make book-loving sound sincere and Nick Hornby is surely one of them. And so after giving it much thought (not really), I think I’m agendaless after all. I don’t read to impress… I think. I  like the smell of paper and I like how books, when stacked nicely, make my room look really, really nice.