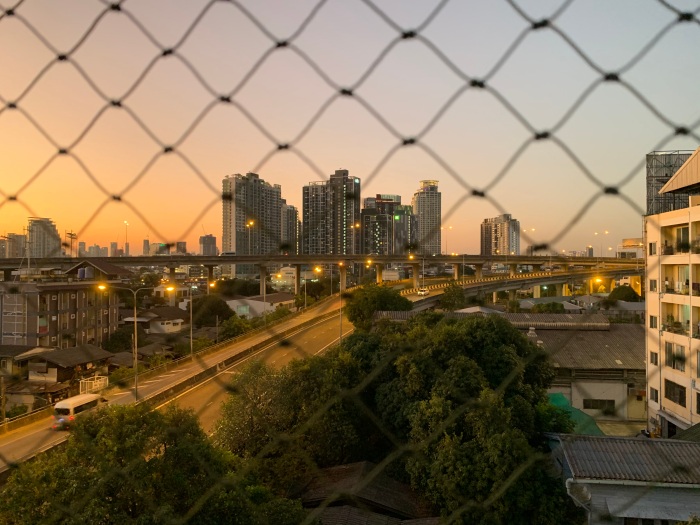 In the next few months, people will be waking up to the reality that they are living through a pandemic. They’ll be sharing their experiences to their hundreds of friends and followers. Some will write essays about what everyone should be doing, some will be writing three-word criticisms, and some will passively observe. Some will be obscene. Everyone will be right and at the same time, everyone will be wrong.

The last sentence in the previous paragraph sounds profound and at the same time, it sounds like nonsensical paradox.

I’ve decided to wear my weeks-old mask when riding the BTS because it feels shameful not to wear one when everyone is wearing one. Unlike Pinoys, Thais aren’t in the habit of giving people evil stares when they think someone looks or is being strange. Thais mind their own business most of the time. I’d rather risk getting sick from this unhygienic practice to put strangers at ease mainly because it puts me at ease too.

At the bookstore, plague-themed books appear to have run out like Albert Camus’s The Plague, the most obvious novel that Bangkokians thought to buy in the time of Covid-19. I didn’t check other plague- and plague-like-themed books like Max Brooks’ World War Z,  Margaret Atwood’s Oryx and Crake, or Gabriel Garcia Marquez’s Love in the Time of Cholera. I have enough books at home to last me two pandemics, and this may be the year I shorten my TBR pile.

If this were the ‘90s, people might drop by at video rental stores to rent videos before they hole up in their houses. Titles likely to quickly become unavailable would include movies like Contagion (which I know didn’t exist yet in the ‘90s), Outbreak, and apocalypse-themed films. It would be sad because video rental shops would probably be closed for a few days and the person who rents it would have to hold on to the laser disc-copy of the Contagion VHS for weeks, immersed and riveted by the life-like scenes unfolding in the Steven Soderbergh film. Or, people would rent something completely unrelated to doomsday scenarios like Wild Things, I Know What You Did Last Summer, There’s Something About Mary or LA Confidential. If this were the early ’00s, some people would drop by at a record store to buy VCDs or DVDs of movies they’d watch more than once. Some would buy a bunch of CDs because they’d need to soundtrack their lives while in quarantine.

Moleskin notebooks and bags were on sale in the lobby of the M floor at Emquartier. People should be snatching those Moleskins because they’re going to be trapped for a few days at home where they’ll be seized by the urge to chronicle their self-isolation, even as they go from app to app and watch Korean teleseryes ‘til their eyes bleed.

The virus could soon shut down Emquartier and other malls. That would then be a demonstration of the virus ability to cripple Bangkok institutions and establishments which provide everything anyone could possible need in this great city. Pharmacies and other small stores have already run out of masks, so you know it’s definitely starting, the demolishing of institutions. We are going to have to learn to fend for ourselves in the next few days, weeks, or months.

I was worried that I’d be the only person not wearing a mask at Muscle Factory, but I seem to have worried for nothing: not a single beefcake at MF was wearing a mask. What a relief. The Muscle Factory guys are made of the the tightest muscles, packed with protein, and are probably extremely healthy. Otherwise, what a shame for them. You couldn’t find a group of people more attuned to keeping one’s self healthy than at that hardcore gym, which I love and will miss. They eat clean, train (note: not “work out”) hard, and sleep early. Does the corona virus stand a chance against them? Probably not. The worst that Muscle Factory patrons could do is, probably, carry the virus and pass it on to those puny ones who don’t train as hard and don’t inject as much protein into their bloodstream. I hope to see them soon.