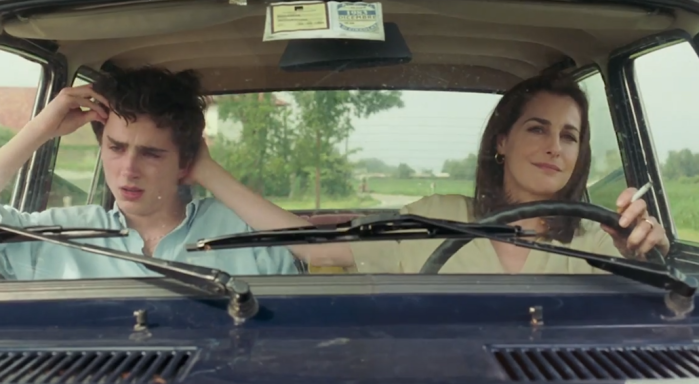 Elio and Oliver live a life of privilege. Elio is young, free, gorgeous, and has parents who own a charming Italian house. Oliver, a guest of his father’s, is likable, smart, and sexy. They’re two guys who fall for each other in a lovely Italian suburb and they both play at being strictly brotherly toward each other. They can do whatever they want except be romantic in public.

Elio may be too young for Oliver, and their romance could have come off as predatory, but it’s very clear (in the book and in the movie) that Elio desires Oliver as much as Oliver likes the taste of Elio’s peach-housed man juice. Elio and Oliver. Oliver and Elio. Nothing and no one’s being corrupted except for a piece of peach.

But still, they have to keep up appearances that everything in the world is as straight as they should be. This is why when Oliver gives Elio a playful massage, it has to appear perfunctory. It’s why Elio has to take Oliver to a secluded pond for a grope and make out session, and why they have to wait for midnight to consummate a fantasy.

It seems perfectly alright to let the world know; the story is set in 80s Italy when gay unions are tolerated. Elio’s parents would have understood too because they’re the intelligent and uncruel sort. But it’s two guys in love. Whether it’s in 1983 or 2017, you know there are barriers and those barriers are great.

And so they do what they must do. They escape to the mountains where they can yell each other’s name abandonedly, go to town to puke in the streets, and wild it out to ‘Love My Way’.

When Elio and Oliver share a tight hug and bid their wordless goodbyes in the train station, I got dehydrated. When Elio’s dad tells him to nurse his pain, and that he envies their beautiful friendship, I turned into a prune.

As an expert in this sort of thing, I can say with some authority that this is really how it happens. That is exactly the way it happens in trees at midnight when we have to be quiet and pretend like we’re just friends with that person with whom we climb the tree. Some of us get over that phase where we climb trees in our parents’ Italian summer house to make out with the house guest, but we never forget the bittersweet memories of these unforgettable late-night climbs.