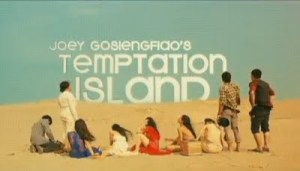 I live for queer, silly pieces of entertainment such as Temptation Island. I’m also a Chris Martinez fan and I truly like his film things. I don’t care what he makes; as long as it’s sold in the mall, I will buy ticket and swallow it up like a good boy. As much as I want to analyze to death the New Chris Martinez Movie, I have very little opinion of it, but I will never pass up an opportunity to talk about Marian Rivera, in however nice a light I have to put her in, or Aljur Abrenica’s existence in the world of showbiz.