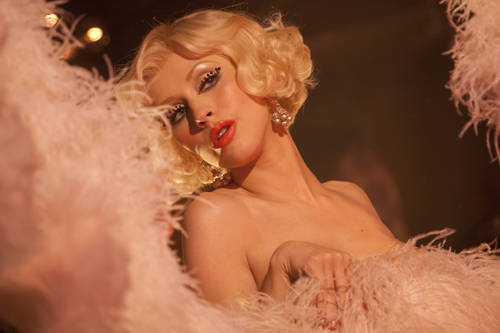 I’m secretly fascinated by Christina Aguilera. She’s the kind of putrid I can’t take my eyes off of. I am both amazed and annoyed by her huge voice. But more annoyed than amazed. What is said of her penchant for big, showy belting, that she’s doing it to impress not express, I wholeheartedly agree. The fascination is due to the most obvious fact of all time: Christina Aguilera’s career trajectory is a drag queen impersonation of Mariah Carey’s. Guess which singer had the same criticism about her huge voice being all about impressing than expressing? That’s right, it’s not Britney.

But Christina fails so constantly and I almost feel sorry for her. Burlesque was her shot at making the expensive, explosive bomb of her career and she nixed it with a decent but still unremarkable performance. She had the benefit of precedents for pop star movie disasterpiece: Madonna’s Swept Away, Britney’s Crossroads, and the one and only Glitter, which should explain why she turned out okay in this. And through no fault of her own, she was backed by interesting supporting actors to anchor what should have been the Christina Aguilera addition to the Big Fat Flop cannon. It shatters me even that Express is so much better sounding than Loverboy could ever hope to be.

You can smell the desperation of some critics to declare this movie as the second coming of Glitter or Showgirls, two movies which should be offended for being associated with this limp dick. Burlesque just isn’t bad enough. It’s very trashy but also highly enjoyable. I find it difficult to find fault in a movie that has about 8 Cell Block Tangos in it. The Express number alone is worthy of the price of admission. Kirsten Bell in a bitcherrific role who gets to speak the movie’s outstanding contribution to film bitchery, ‘I will not be upstaged by a bitch with mutant lungs!’ is just a bonus. For lack of a Rob Marshall dance flick to satiate my basest desire for movie musicals, Burlesque comes as a gift from baby Jesus.

That Glitter was a huge flop is a distinction I’m actually fine with because its alleged awfulness at least had character. It flopped tremendously and so it belonged to history. It will not be forgotten. Christina and Burlesque is sadly not of the caliber of the Truly Awful which is a pity. She could have had her very own Glitter but she failed by doing just fine. She didn’t even get a Razzie nomination. She failed to fail spectacularly but at least she failed with Cher.

The Mariah parallel is really not so bad. Look no further than the bestsellingest album of 2005 for proof that great artists can transcend Glittery career setbacks. Christina Aquilera is a good singer. She’s one of the most beltingest hence one of the most well regarded singers, and if she is seriously devoted to following the footsteps of her most obvious predecessor, she will make her own The Emancipation of Mimi. And if she’s really, really serious, she will find her own Lee Daniels and make him cast her in a dowdy social worker role, and star in her own Precious. She may not get an Oscar nomination for it but it will get her back on track. But the way things are going, she will probably star in a comedy with Adam Sandler and do okay and that will be it. She has a way of watering down things to her disadvantage. She is half-assed through and through. But I won’t lose hope just yet. There’s a tiny part of me that roots for the lately underdogging Christina. She long ago launched an alter ego – Xtina. She’s getting there. But in terms of on-screen persona (alleged) awfulness, Ali is no Billie.