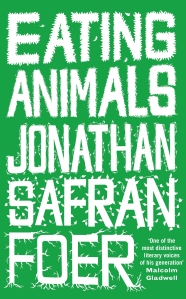 A plea to stop people from eating meat forever is probably one of the most futile advocacies ever conceived. Eating animals contributes the greatest to global warming, is very unhealthy, and is just plain vicious, according to Jonathan Safran Foer. Aside from his principles, Foer has 3 years’ worth of research to back these claims up. It might be unimaginable for a diet to always be composed of only leaves and crops, and it will be very hard to never have fast food chicken for as long as you live, but the things they do to animals, as presented here, are beyond what you can imagine the most vicious serial killer can do to humans, which might just persuade some people to actually cease animal consumption for life. But moving as Jonathan Safran Foer’s beliefs and his devotion to the cause presented by the admittedly well documented and believable inhumanities done to animals, I just don’t think it will be possible for some people to quit meat.

Eating Animals primarily exists to persuade humans to stop, completely, the consumption of animals. He details extensively the ways in which animals processed for meat are viciously murdered for the seemingly unworthy cause of satiating human desire for big juicy steaks. It may have already been a widely known fact that big meat corporations aren’t exactly the paragons of good business practices but Foer goes for the shock and enumerates the cruelties done to our animal friends. Factory farmed chickens inhabit really cramped spaces, get manipulated into living false temperatures, and get drugged in abnormal dosages. Massive genocide is done to shrimps and other rare sea creatures in order to harvest tuna. Cows are mutilated in all the worst ways possible and pigs are practically raped.

If these aren’t enough to make you give up your pork loins and your tuna whatever gourmets, then at least know that for every bite, some poor pig’s eyeballs are falling out of its socket because your demand for its meat directly order meat producers to resort to fast, efficient but cruel ways to ‘process’ animals. Thinking about this only fills you with anxiety and self-doubt. Makes you feel hungry too. It’s a noble cause but it’s a very huge imposition. To be urged, no, pushed into the belief that eating animals is wrong, I would have to be bribed to fully commit to it. With a huge amount of money, with which I will secure for myself a vegetable-only diet. Although I really wish that it was that easy to just decide to not eat meat. The idea that my eating habits is helping a lot of animals lead healthy and happy lives sounds like such a pleasant thing to contribute to. But it’s just not happening. Sorry. But not that sorry.

I’m not a very principled person and the amount of profanity that comes out of my mouth and the sort of hatred I regularly conceive sometimes frighten me about the state of my morals. I’ve never been particularly concerned at all about animals as pets or as food, but to know of the cruelty imposed upon them as necessitated by corporations as demanded by you the consumer is to recognize a cycle so awful, that allowing yourself to actually consider a decision to shun meat, though it might seem hollow, is a moral one, at least according to JSF. It is not a tug at the heartstrings but the search for a heart, even though animal and heart often calls to mind that hearty dish called bopis.

4 thoughts on “Sympathy for the bacon”