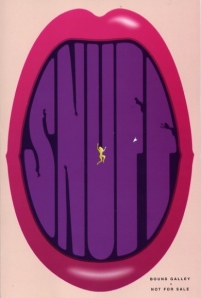 Judge it by its opening paragraph:

One dude stood all afternoon at the buffet wearing just his boxers, licking the orange dust off barbecued potato chips. Next to him, a dude was scooping into the onion dip and licking the dip off the chip. The same soggy chip, scoop after scoop. Dudes have a million ways of peeing on what they claim as just their own.

The characters interest me more than the story does so suffice it to say that stuff happens. Internal dialoging  throughout are Mr. 137 (the gay), Mr. 72 (the virgin) and Mr. 600 (the huge dick), stars of the movie-in-production, World Whore Three. Automatically, Palahniuk wins me over for conjuring the most number of hilarious porn titles – Chitty Chitty Gang Bang, The Da Vinci Load, The Twilight Bone – to name a few. Sheila, the production assistant who doubles as Cassie Wright’s left hand, keeps the boys in check and makes sure all the dicks are lined up and ready for take (ie hard). While I like how seamlessly the story flows through each’s narration, I feel like like Cassie Wright was robbed of characterization. It was her who says ‘this boy fucks like he has something to prove’ after all, leaving me in stitches, not to mention, drool. You will seriously love this.

If I’m reading books on the basis of cuteness, and I think I do more than I care to admit, Palahniuk should fit right on top of the heap of books I intend to read. If this sounds like platitudinous non-sense it’s because it is and congrats for letting me let you figure it out. Also, there’s no point in rebuffing the charms of the Palahniuk cannon as the thousands of coolists who like cool things including Chuck Palahniuk would tell you. Snuff’s vagina lips were just too hard to resist.